Showing posts from May, 2021
Show all

The Glorious Sunflower - the Fourth Sister in a Native American Garden 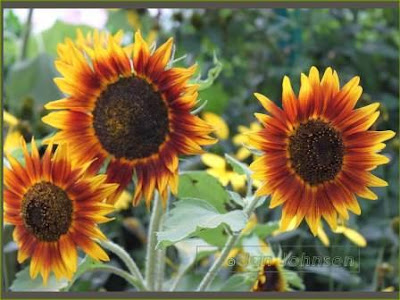 In one of my earlier blog posts I wrote about the Native Americans' Three Sisters Garden (corn, beans and squash )  but I neglected to tell you of the Fourth Sister ...a very important member of this family! This is from Hubpages :  "Fourth Sister, didn't look anything like her other sisters, although she was as tall and as slender as First Sister (corn) . That seemed fair to all, because Third Sister and Second Sister shared similar but different features. They could climb and run, while their other two sisters were forced to stand tall and proud." Mother Sun explained that each sister had her job and each had to benefit from and protect one another.  But Fourth Sister's job was most important of all -- for she was the guardian of the North , planted firmly, to protect others from the robbers who soon would come. The fourth sister was the elegant sunflower. The Sisters are known to the Native Americans as the “mothers o
12 comments
Read more
More posts