Showing posts from January, 2017
Show all

'Om' in the Garden 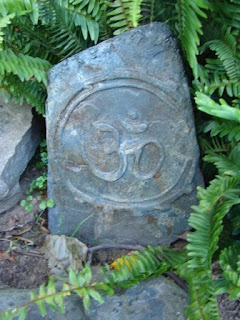 We need to balance the pace and intensity of modern life
with periods of what poet May Sarton
has called "open time,
with no obligations except toward the inner world
and what is going on there."

~ Thomas Moore So how to touch the inner world in a garden?..


I suggest chanting 'OM.' (really it is 'AUM'), long and sustained, several times...“Om” is the oldest and most widely known one-syllable mantra or chant.    It is said very, very slowly.

Mantras are believed to contain a vibrational power that can lift us to higher states.

Scientists recently discovered that rhythmic recitations of a mantra can slow breathing and regulate heart rhythms, this in turn oxygenates the blood, lowers blood pressure and induces a feeling of calmness and well-being.
The Sanskrit symbol above represents “OM”. It does not say '30' as some might assume. The Om symbol (in photo above) consists of three letters, “a,” “u,” and “m,” and includes an after-sound of silence: 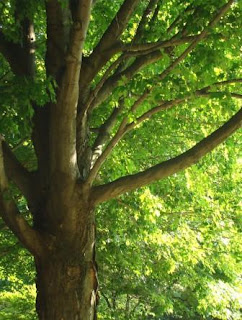 Ordinarily, I go to the woods alone, with not a single friend….
I don’t really want to be witnessed talking to the catbirds or hugging the old black oak tree. I have my way of praying, as you no doubt have yours.

Besides, when I am alone I can become invisible. I can sit on the top of a dune as motionless as an uprise of weeds, until the foxes run by unconcerned.

I can hear the almost unhearable sound of the roses singing.

If you have ever gone to the woods with me, I must love you very much.
Mary Oliver

Why Gardening by the Moon Works 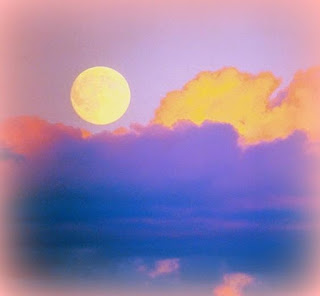 "With the waxing of the moon, the earth exhales."
- Ute York

Lunar gardening is fun and makes so much sense!  The gravitational pull of the moon on the earth affects water on our planet. The moon's pull is stronger than the sun because, even though the sun is larger, the moon is closer to the earth.


As the moon gets full or waxes, its gravitational pull on the earth gets stronger. And it is felt the most when the moon is full (the moon and sun pull from the opposite sides of the earth at this time).

This is when the tides are at their height and  people go a little wild.
But not only does the moon’s gravity affect tides and us, it also affects underground water tables.

So if you plant when the moon is waxing or growing toward being full, remember the water table is rising as well.

This means water is more easily available to a plant. The increased moisture content of the soil encourages seeds to sprout and grow.
Dr. Frank Brown of Northwestern University researched this over a …
5 comments
Read more 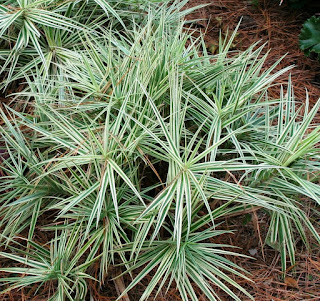 What is deer resistant, grows in part to full shade, has varigated leaves, likes wet soil, has no serious pests and will naturalize and spread?

Carexphyllocephala'Sparkler' 'Sparkler' Carex or sedge thrives in moist, organically rich soils so it is perfect for rain gardens or heavy soil. It is considered to be winter hardy to USDA Zone 7 (hardy to 10 degrees).  It can be grown as an annual is colder regions.
‘Sparkler’ is clump-forming and has whorl-like clusters of grass-like, variegated leaves at the end of each 12" - 24" tall stem. This makes it look like a mini palm of narrow leaves with broad white margins. Tony Avent describes Carex Sparkler as “a grove of miniature variegated palm trees.”

photo taken by Laura McKillop in the conservatory at Longwood Gardens
In southern locations where plants are reliably winter hardy, you can grown them in a mass in a shady spot..in colder areas you can grow them in planters to light up a shady corner. It is also great f…
2 comments
Read more

Make a Yoga Garden This Year 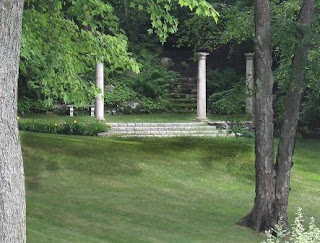 Picture yourself being outside in a garden on a warm sunny morning. Nearby, birds are singing and flowers are blooming. This is a perfect space to unroll a yoga mat and embark on some ‘sun salutations’.  So why not create a yoga garden? You can do this using some design ideas I offer in the book, ‘Heaven is a Garden – Designing Serene Outdoor Spaces for Inspiration and Reflection’ (published by St. Lynn’s Press).

Just as yoga allows us to ‘tune into’ our bodies, serene gardens help us get in touch with nature's calming energies. Any outdoor setting, no matter the size, can become a place of quiet beauty. It should be partially sheltered, out of the wind and be bathed in gentle sunlight from east or southeast or dappled shade.   I suggest you aim for 'simplicity, sanctuary and delight'.

Simplicity means clean lines such as slow curving walks or plant beds. Sanctuary refers to a a sheltered corner formed by a hedge or tree  where we feel protected. And delight is anything tha…
Post a Comment
Read more
More posts