Showing posts from March, 2014
Show all

Heaven is a Garden - an interview with Open Voices - Nature Sacred

This interview with me is from a wonderful blog called Open Voices which is part of the Nature Sacred website. I am honored that this fine group chose to spotlight my new book. I urge you to check them out - always something inspiring in their blog!
A Deeper Place of Being: An Interview with Jan Johnsen Posted on 03/06/14 Jan Johnsen’s forty years of practice in landscape architecture has taught her that gardens not only inspire and delight but also impart a sense of well-being, offer respite, and induce feelings of renewal to those who visit and simply sit awhile.  Drawing on historical precedents from many cultures as well as design techniques honed through recent practice, her gardens are deeply nuanced, no matter the size. In anticipation of the upcoming release of her latest book, Heaven Is a Garden – Designing Serene Outdoor Spaces for Inspiration and Reflection, published by St. Lynn’s Press, Open Voices spoke with the noted landscape designer about her passion for creating out…
1 comment
Read more

A City Kid's Introduction to Flowers 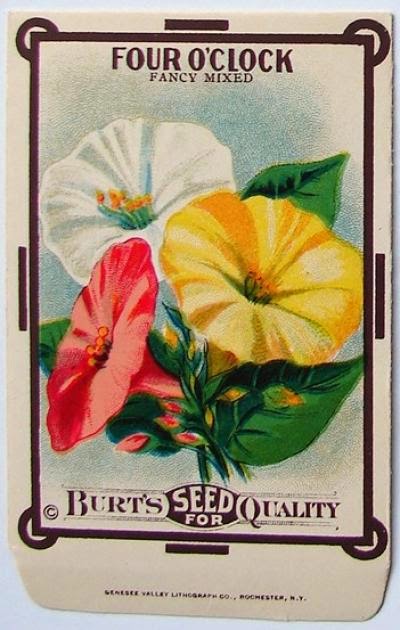 Shakespeare wrote, “… a rose, by any other name, would smell as sweet,” which means that a name does not change the experience.   I concur!

But I was introduced as a New York City child to flowers through their names – no color photos, sweet smelling blossoms or informative text – just typed names on a page and I fell instantly in love with the descriptive floral monikers.

Up until the age of nine, I lived in a small apartment in the borough of Queens in New York City. It was in Fresh Meadows, a complex called byLewis Mumford “perhaps the most positive and exhilarating example of community planning in the country.”

But it was a neighborhood of squat, three story brick buildings and small duplexes, each with a paved playground behind it and some areas of grass that never grew because us kids always played on it….


Every winter, my school, PS 26, in an attempt to raise money, would hand out long, narrow order forms for flower and vegetable seeds and tell us kids to take them home.

We were t…
5 comments
Read more

The Secret Garden - Photo of the Day 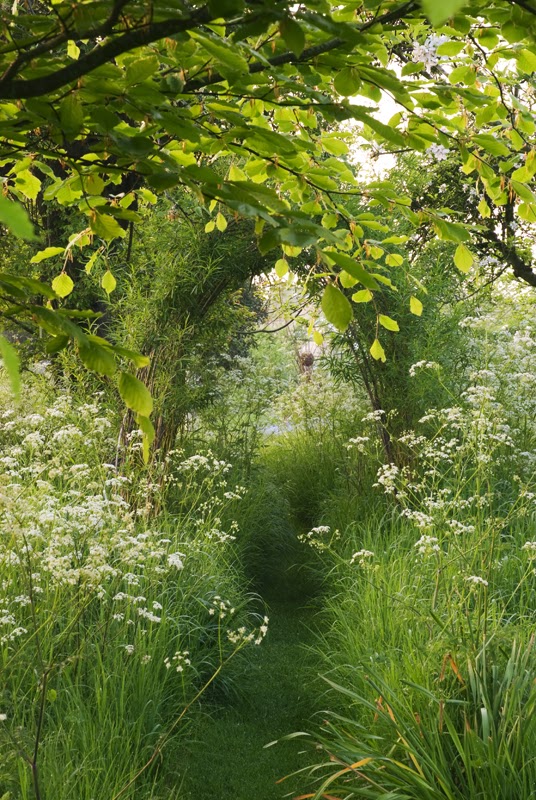 "A mown path leads through a sea of cow parsley (Anthriscus sylvestris) to a willow (Salix) arch on a still, early, summer morning...I felt my eyes drawn into the cow parsley by the mown path and could imagine this setting in a children's story, perhaps leading to a secret garden."
Edwards was a finalist in the Garden Views category in the International Garden Photographer of the Year organization. This is the world's premier competition and exhibition specializing in garden, plant, flower and botanical photography.

The main exhibition is held annually at Kew Garden in the UK, with touring exhibitions all over the world.


The competition closes on 31st October every year. Winners are announced at the opening of the Kew exhibition, the following March.
The competition is open to everyone anywhere in the world.  Images do not have to…
2 comments
Read more 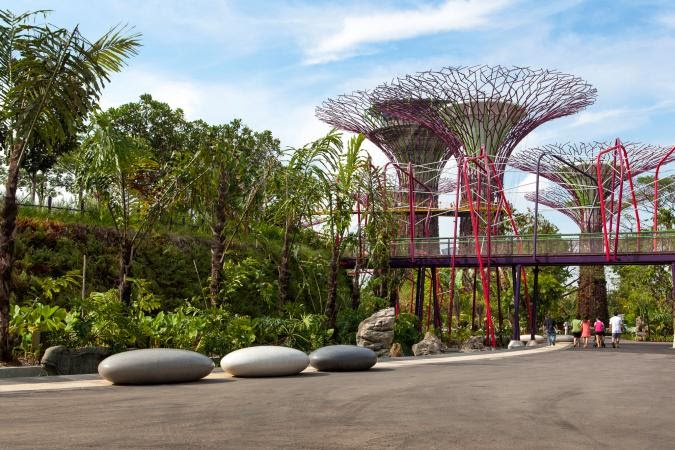 Ben Barell makes stunning Pebble Seats -  from concrete - they are a great alternative to public benches.  The top photo is in Singapore. The forests of India are a critical resource for the rural people throughout India because of their provision of food, fuel and fodder. They are also revered for soil stabilization, shade and their innate vitality. As the trees were increasingly cut down for commerce and industry in the late 20th century, Indian villagers used Mahatma Gandhi's method of satyagraha or non-violence resistance to protect these mighty arboreal beings.
In the 1970s and 1980s this resistance known as the Chipko Movement. The name Chipko came from a word meaning 'embrace': the villagers hugged the trees to save them from the contractors' axes.


In 1980 The Chipko protests achieved a major victory with a 15-year ban on felling of trees in the Himalayan forests by order of India's then Prime Minister, Indira Gandhi.

The movement spread to many parts of India and also generated pressure for a natural resources policy sensitive to people's needs and environmental factors. These forests are st…
2 comments
Read more

Reverie: photo of the day 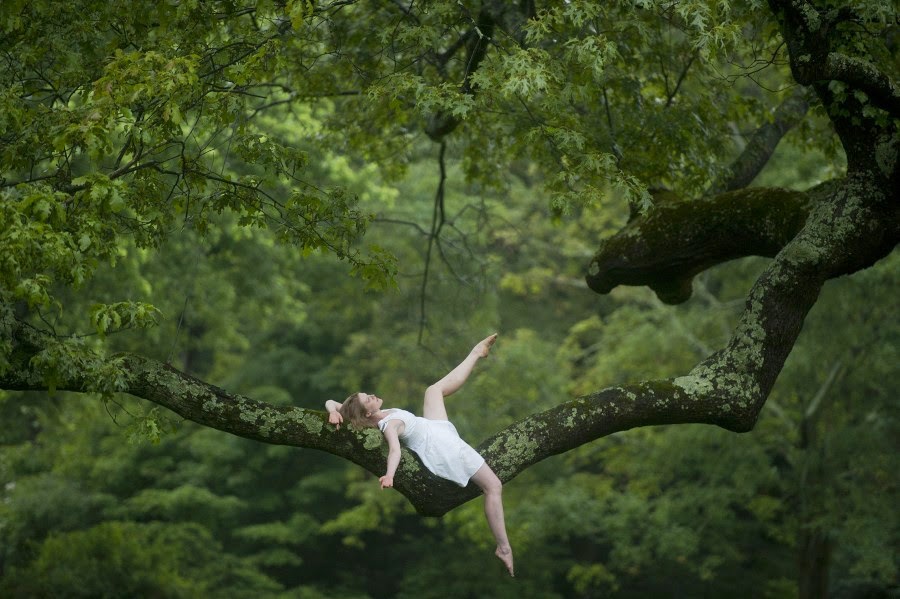 If you look deep enough you will see music;
the heart of nature being everywhere music.
~Thomas Carlyle 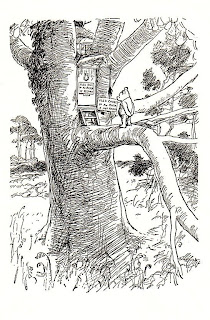 "...Years ago I heard somebody say that all our political and diplomatic conferences ought to be moved out of smoke-filled rooms and held underneath trees...

I wonder if under those circumstances the conclusions reached might not be quite different from what they are at present..."

from justfocus in New Zealand
Imagine if the United Nations met under trees?

Trees are a wonderful mediating influence in our lives and are there to help.

I believe the UN discussions might be a little more fruitful if held under the canopy of a stately sugar maple.

This goes for children too:

If a child misbehaves, instead of sending them into a corner, have them go outside and sit at the base of a tree...or better yet - up in its limbs!  Tell him or her to talk to the tree and listen to its guidance.

A Floating Yellow Bench - Photo of the Day 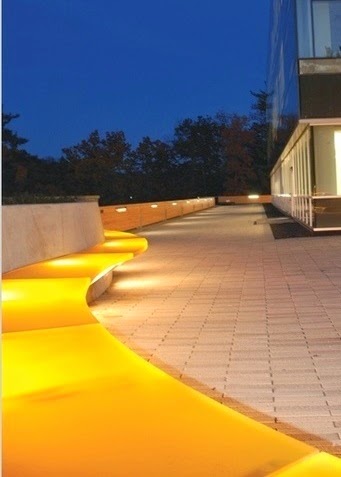 In Ithaca, NY a  sinuous yellow bench, (2-inch resin, color: Chroma Marigold*2) is illuminated from below making it look like it is floating.

The curve and depth of the seat give Cornell students a variety of sitting and/or lounging options.

They said the color yellow was chosen to evoke the sense of sunlight, something rare in the Ithaca climate.

My thought: it also cheers people up and stimulates the production of serotonin which makes you happy.  Here is to more yellow in school settings!

We all crave a serene haven outdoors where we can simply relax and enjoy the moment.   My beautiful Powerpoint, Serenity by Design,  talk explores ways you can use the ‘power of place’, layout and shapes, the cardinal directions and color to create a landscape of any size that elevates your mood and increases your sense of wellbeing.

I may even have my new book, 'Heaven is a Garden' to sign... I am not sure it will arrive in time but hope springs eternal!

Forest Therapy - A walk a day keeps the doctor away.... 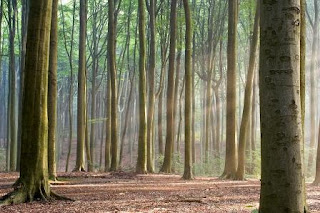 I often take a walk in the woods near my house.
I walk on paved streets to reach this forest trail, taking rapid strides and often breathing  in chilled morning air. I catch the early sunlight through the trees. It is such a wonderful time and I feel calmer and more centered.

My little morning reverie has a name: ' forest bathing' or, in the original Japanese, 'Shinrin-yoku'.  This relatively new therapy, the Japanese tell us, literally instills peace, calms us and promotes immunity to disease!

Like a walking healing meditation, "forest bathing" coordinates breath and movement in the presence of the scent of forest trees to uplift us.
Ever since a Japanese government agency coined the term, 'forest bathing'  in 1982, 'shinrin-yoku' has slowly made its way into the vernacular in Japan  It has a great many Japanese fans who now can visit forty two 'forest therapy' parks for stress relief.

Their goal is to set up 100 within the next decade.

Photo of the Day - Diascia and Helen Dillon "The most serious gardening I do would seem very strange to the onlooker, for it involves hours of walking round in circles, apparently doing nothing."
- Helen Dillon
2 comments
Read more

NatureSacred - A Great Interview about Heaven is a Garden

Open Voices Blog News and conversations about the growing evidence of the healing power of nature and green development in cities
I am honored that the Open Voices blog of the TKF foundation chose to interview me about my upcoming book. What a great piece they wrote!  I believe wholeheartedly in this wonderful organization and I urge everyone to go check them out.
CHECK HERE FOR THEIR INTERVIEW WITH ME.

Tom and Kitty Stoner began the TKF foundation in 1996 with the belief that everyone needs to “be in nature” as nature both heals and unifies us.
To that end, their  private nonprofit organization funds publicly accessible urban green space.
Today, their goal of creating 'open, sacred places in nature', designed to provide an opportunity for a deeper human experience, has attracted a host of supporters: environmentalists, health care professionals, landscape designers, universities, corporate CEOs, local governments, and community activists, to name a few.