Showing posts from June, 2013
Show all

Muffling the World in a Garden 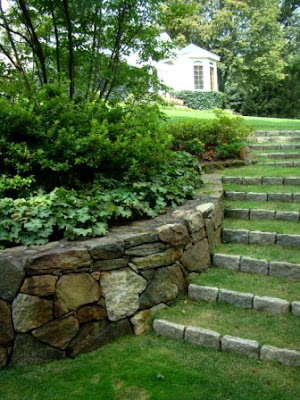 Landscape by Johnsen Landscapes & Pools   Meet everyone and everything through stillness rather than mental noise.    ~ Eckhart Tolle Stillness is a state of mind.  And it is also a state of being, best felt outdoors in a natural locale.   Marser on Flickr   The stillness of a landscape filled with birdsong and babbling water induces a sense of peacefulness, where  'mental noise' may cease and quietude reigns.  In this atmosphere, uplifting thoughts begin to take root...     Pico Iyer  wrote about this beautifully:   “I loved the quiet places in Kyoto, the places that held the world within a windless moment. Inside the temples, Nature held her breath. All longing was put to sleep in the stillness, and all was distilled into a clean simplicity.”   ―   Video Night in Kathmandu: And Other Reports from the Not-So-Far East     Gardens created with a 'clean simplicity' are very special indeed . They are at th
3 comments
Read more 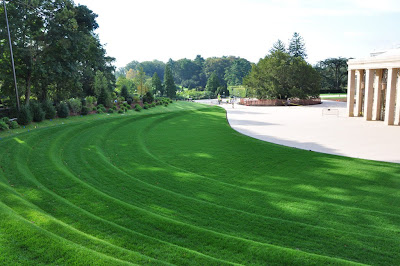 The East Conservatory Plaza of Longwood Gardens in Kennett Square, Pennsylvania is a gem of an outdoor space.    Kim Wilkie designed a landscape, opened on October 9, 2010, that offers a place to relax and houses 'environmentally conscious' restrooms. It also features a sweeping, south-facing arc of a terraced landform that provides a grand view of the East Conservatory. This view was never possible before. Here is an early working sketch by Kim Wilkie The Plaza stresses conservation of natural resources. The underground restrooms take advantage of the heat provided by earth's natural  insulation, an age-old concept that is finally being rediscovered. Our ancestors used this technique for their cold storage of perishables,   root cellars ; for growing on seedlings in late winter, cold frames ; and Victorians used this idea for their 'ferneries' . T his energy efficient approach allows natural  light to come in through a clear
2 comments
Read more 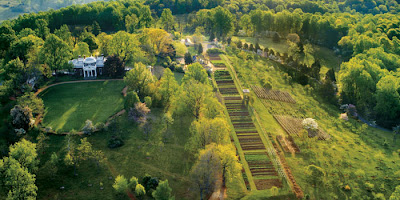 Monticello, courtesy of Monticello/Thomas Jefferson Foundation, Inc.   I admit it, I am a Thomas Jefferson fanatic... No well known historical person has combined so many diverse talents as good ole'  T.J.  ( well, maybe his friend, Ben did...) Besides his leadership and writing acumen, Jefferson was a genius when it came to building design and, yes, gardening. 1793 Plan for  Washington, DC Jefferson took immense interest in architecture, city planning and landscape architecture. During his years as president, he assisted in the design of Washington, D.C. and his ideas for the city's layout were combined with those of Pierre L'Enfant who was hired to draw up the plans. Of course, we all know about his home on a hilltop, Monticello, in Virginia. But his finest achievement in design and site planning may be his plantation retreat, Poplar Forest , in Bedford county, Virginia.     In fact, the great historian,  David McCollough wrote of Poplar Forest,
6 comments
Read more

Photo of the Day - Serenity in the Garden at Mohonk Mt. House 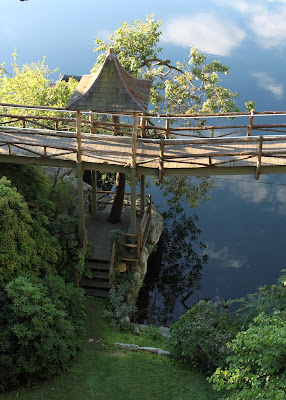 photo by Jan Johnsen- all rights reserved Mohonk Mt. House is a magical, mountain top hotel in New Paltz, NY. I worked there as a young gardener after studying landscape architecture at the University of Hawaii. That was 40 years ago and I am still working - more than ever - in the landscape profession.  Now I teach, write and make beautiful landscapes for people.    www.johnsenlandscapes.com I took this photo 2 years ago...Go for the day - as a day visitor -  and prepare to be amazed!
2 comments
Read more

In praise of Buddha Gardens 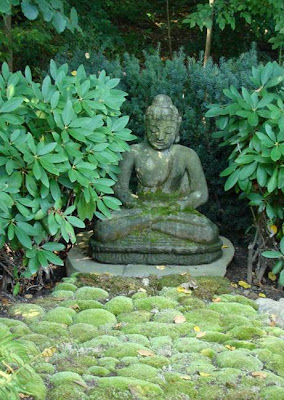 Buddha Garden - Jan Johnsen “I think the true gardener is a lover of his flowers, not a critic of them.  I think the true gardener is the reverent servant of Nature, not her truculent, wife-beating master.  I think the true gardener, the older he grows, should more and more develop a humble, grateful and uncertain spirit." Reginald Farrer If you are, like me, on the road to developing a more humble, grateful and uncertain spirit, there is no better way to help this along than by placing a Buddha (or one his 'associates') in a landscape setting. Volcanic Ash Buddha from Indonesia Meaningful treasures such as a jizo, Buddha or Indonesian goddess remind us to slow down, take a breath  and live in the moment. Buddha statues elicit a serene response in us...although I am not exactly sure why. Perhaps it is their quiet countenance. Just looking at the photo below calms me down. Buddha head photo By Jennifer Cheung, Sunset Buddha heads, in particular,
12 comments
Read more 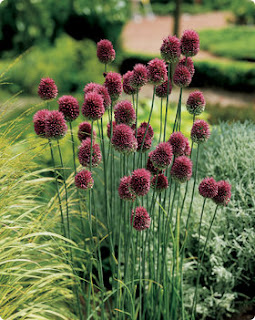 A garden can be like a little piece of heaven in your backyard. You can incorporate color, light, shape, water, rocks, trees and fragrance to make a setting that causes your heart to sing.   My aim for the past 40 years has been to create enchanting outdoor spaces that induce sweet reverie through inspired design. Now I am anxious to share my knowledge with others and reveal captivating ideas for creating gardens of serenity and delight just as I have done for my clients throughout the years. I will be giving a one day class at the New York Botanical Garden on Tuesday, June 11, 2013.  10:00 - 3:30 pm ( with a break for lunch) Johnsen Landscapes & Pools Did you know that the octagon is a powerful shape? Perhaps this is why Thomas Jefferson designed his home at Poplar Forest as an 8 sided octagon...     Maybe you know that  Maple trees  affect us differently than oaks. I will explain why this is so...     I will share my approach to 'duality
4 comments
Read more

The fabulous Japanese Tree Lilac - 'Ivory Silk' and others 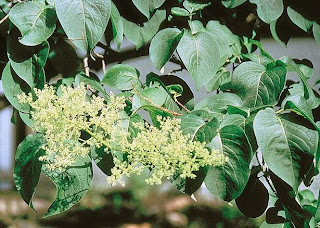 from USDA  National resources conservations service   Years ago I moved to Northern Vermont  (Montpelier) and worked as a landscape designer for a design / build firm there.  I soon discovered that my 'plant palette' was greatly altered due to the colder climate. I had to learn about cold hardy plants - and fast!     One of my favorite cold hardy discoveries that has remained a favorite of mine is the ornamental tree,   'Ivory Silk' Tree Lilac ( Syringa reticulata "Ivory Silk" ).     This small flowering tree, which grows no taller than 25 feet, was selected by Sheridan Nursery of Ontario, Canada in 1975 as a compact cultivar of Japanese Tree Lilac. It needs full sun and is hardy to USDA Zone 3! I love 'Ivory Silk' because it flowers later than other flowering trees and has spectacular creamy white, fragrant flowers borne in abundance in 6" - 12" long clusters .  In my part of the world it blooms from June
12 comments
Read more
More posts